Caring For Someone with Dementia

Caring for someone with dementia is often helped by receiving education, both in terms of knowledge and skills for this role. Find out more about education opportunities for those caring for people with dementia in Cardiff and the Vale of Glamorgan.

Jackie and George, from Llandaff, attended Solace, where they were able to share experiences with other carers and people living with dementia. They also received talks from people who could explain what help was available to them. They learned about carers assessments, bin collections and welfare benefits, things they had not previously been aware of.

Jackie found getting a carers assessment very difficult. Having spoken to other carers, she knows that others have experienced similar challenges. In her instance, Solace guided her through the process.

Jackie found some of the informal help the most useful. They met people from the Alzheimer’s Society at St David’s Hospital and learned about carers’ courses and social activities such as the Forget Me Not Chorus and Dementia Cafes.

Jackie says this was a huge lifeline for her and George:

“It made such a huge difference knowing there was a support mechanism behind us. If something was going wrong, there were people to ask for help who you were seeing regularly. Otherwise, you are on your own at home.”

She also emphasises the importance of socialising, remembering that she and George were able to enjoy going to restaurants in the early days of his diagnosis and that she always found staff to be supportive and sympathetic. In contrast, she found that some friends withdrew from them and stopped asking them to social events, which added to the sense of isolation.

David and Joyce were put in touch with Alzheimer’s Society, where they made friends and David was able to access reading materials to teach him more about Joyce's dementia. He also found that he could ring them at any time for support.

After Joyce sustained severe injuries from several falls, they were visited by Social Services who referred the Start team and the React team to them. This lead to them having a carers assessment, which determined that they were eligible for community care.

To anyone affected by dementia, David recommends talking to your GP and contacting Solace, as well as Age Connects. They also received tremendous support from Diverse Cymru, Alzheimer’s Society and the staff at Rookwood Hospital. He also has high praise for the Forget Me Not Chorus. 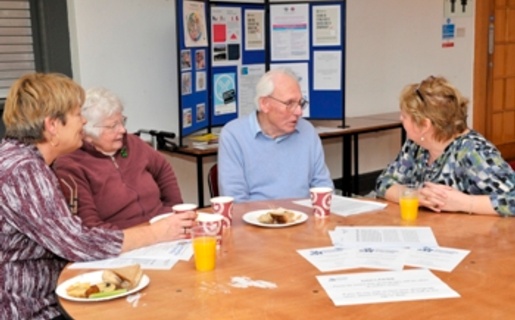 Bill and Yves have received invaluable support from Crossroads, who provide sitters so that Bill can attend church and play bowls. Not only does this give him respite; it also keeps him fit and able so that he can continue to care for Yves. Their social worker was also very supportive. He has also received help from Nexus, who he heard about from a booklet he picked up at his pharmacy.

Bill is concerned about Yves being looked after in a care home. He would prefer to continue caring for her at home, which he believes is the best place for her, but this may become increasingly difficult as her illness progresses.

Bill’s advice to other carers is to accept the help available, but also to be persistent when necessary.

He says: “Seek as much as you advice as you can. There is help out there. Make a nuisance of yourself if necessary. Keep persevering. It’s not easy but you have to do it.”