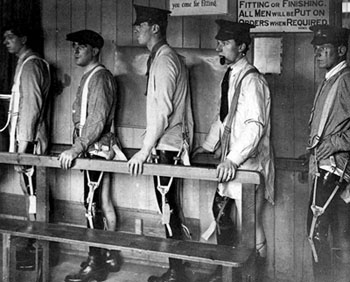 Origins of the service

The Artificial Limb & Appliance Service (ALAS) in Wales, as in England, has a history stretching back to the 1914/18 war, when a limb service was set up in Roehampton by the War Office to deal with the needs of war wounded amputees.

Since then, the service has changed and developed incrementally and, by the 1960's, was operated by the Department of Health and Social Security for a largely civilian population.  By then too, wheelchair supply was added to the remit and in some centres other loosely related disability services came into the system. The majority of the service users were elderly individuals who often had disabilities due to systemic and multiple pathology.

In 1984 the Government responded to widespread criticism of the artificial limb and appliance services and set up the McColl working party to review and report on the adequacy, quality and management of the services in England.  The working party reported in 1986 recommending that a new management board should be set up to manage the service on an efficient and cost effectiveness basis.  As a result, a special Health Authority - 'The Disablement Services Authority (DSA)'  - was set up in England to manage the 49 Artificial Limb & Appliance Centre (ALAC) services through regional and district Health Authorities by the target date of 1 April 1991.  The DSA was in being from 1 July 1991 when the ALAC services were transferred to the field Health Authorities in England.

After a period of consultation, it was agreed that the Welsh Health Common Services Authority (WHCSA) should assume operational management responsibility for the services on 1 April 1988.  The Artificial Eye Service in Wales remained under Welsh Office management until it too was transferred to WHCSA on 1 January 1993.  At the time of the transfer of the service to WHCSA, it was agreed that the transfer should be for an interim period - April 1988 to April 1991.  There would then be further consultation with the wider NHS in Wales.

The consultation took place during 1995 and in April 1995 the Secretary of State decided that the management of ALAS should, as from 1 April 1996 transfer to the University Hospital of Wales, Morriston and Wrexham Maelor NHS Trusts.   There are three ALAC's in Wales - Cardiff, Swansea and Wrexham.

The services are operated in the three centres by an unique collaboration of the three separate Trusts and are delivered to people in a variety of settings.

The service is commissioned by the Welsh Health Specialised Services Committee and provided through a consortia arrangement with three providers.